Note: This is a preview feature available in Chrome Canary from version 105.

What exactly happens internally when you open a <dialog> as a modal? 🤔

It is put into a top layer. Top layer content renders on top of all other content. For example, a modal dialog needs to appear on top of all other DOM content, so the browser automatically renders this element in a 'top layer' instead of forcing authors to manually battle z-index. A top layer element appears on top of an element even with the highest z-index.

The top layer can be described as 'the highest stacking layer'. Each document has a single associated viewport and, therefore, also a single top layer. Multiple elements can be inside the top layer at the same time. When that happens, they stack on top of each other, the last one on top. In other words, all of the top layer elements are placed in a last in, first out (LIFO) stack in the top layer.

The <dialog> element is not the only element that the browser renders into a top layer. Currently, the top layer elements are: popups modal dialogs elements in a fullscreen mode.

Here is a demo with a couple of dialogs that have styles applied to their backdrops (backdrops described below):

# What is a backdrop?

Luckily, there is a way to customize the content beneath the top layer element.

Every element in the top layer has a CSS pseudo-element called a backdrop.

The Backdrop is a box the size of the viewport which is rendered immediately beneath any top layer element. The ::backdrop pseudo-element makes it possible to obscure, style, or completely hide everything located below the element when it's the topmost one in the top layer.

When you make multiple elements modal, the browser draws the backdrop immediately beneath the frontmost such element and on top of other fullscreen elements.

Here is how you style a backdrop:

# How to show only the first backdrop?

Every top layer element has a backdrop that belongs to a top layer stack. These backdrops are designed to overlap each other, so if the opacity of a backdrop is not 100%, the backdrops underneath are visible.

Check out the code in this example demo:

Moreover, DevTools top layer support helps to visualize the position of the backdrop pseudo-element in the top layer stack. Even though it is not a tree element, it plays an important role in how the top layer works and can be useful to developers.

With the top layer support features, you can:

Let's see how to use these features!

To help visualize the top layer elements, DevTools adds a top layer container to the elements tree. It resides after the closing </html> tag.

You can turn off any badge, including the top-layer one. To disable the badges, right-click on any badge, choose Badge settings and clear the ticks next to badges you want to hide.

The badges next to the tree elements indicate whether the elements belong to the top layer and contain the position number of an element in the stack.

# Backdrops in the top layer container

As mentioned above, every top layer element has a CSS pseudo-element called backdrop. You can style this element, so it is useful to also inspect it and see its representation. 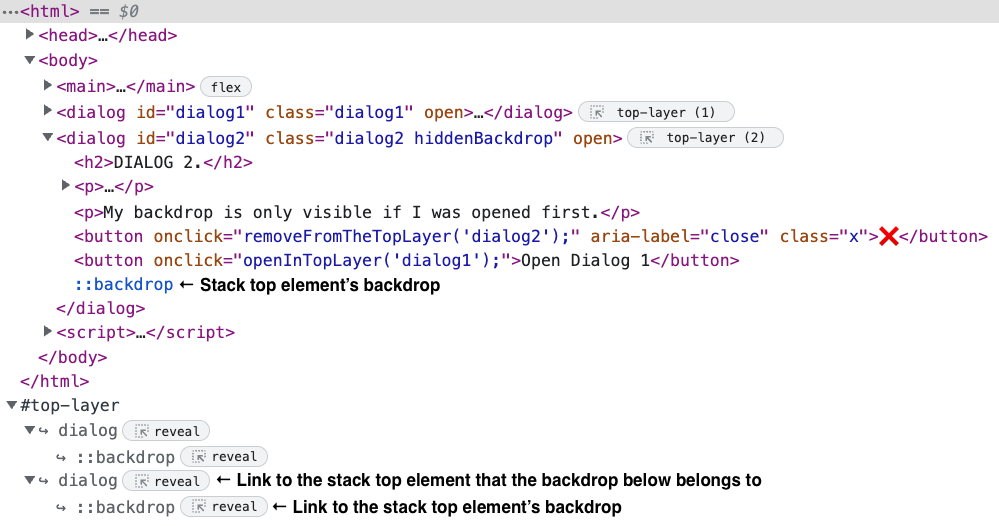 # Changes to the DOM tree

ElementsTreeElement, the class responsible for creating and managing individual DOM tree elements in DevTools, was not sufficient to implement a top layer container.

To display the top layer container as a node in the tree, we added a new class that creates DevTools tree element nodes. Previously, the class responsible for creating DevTools elements tree initialized every TreeElement with a DOMNode, which is a class with a backendNodeId and other backend-related properties. backendNodeId, in turn, is assigned on the backend.

To achieve the desired placement, the class that renders an element attaches TopLayerContainer as the next sibling of the <html> tag.

A new top layer badge indicates that the element is in the top layer and serves as a link to the shortcut of this element in the TopLayerContainer element.

At first, the plan was to duplicate top layer elements into the top layer container instead of creating a list of links to the elements. We didn't implement this solution because of the way the fetching of element's children works in DevTools. Each element has a parent pointer used in fetching children and it is impossible to have multiple pointers. Therefore, we can't have a node that properly expands and contains all children in multiple places in the tree. In general, the system was not built with duplicate subtrees in mind. 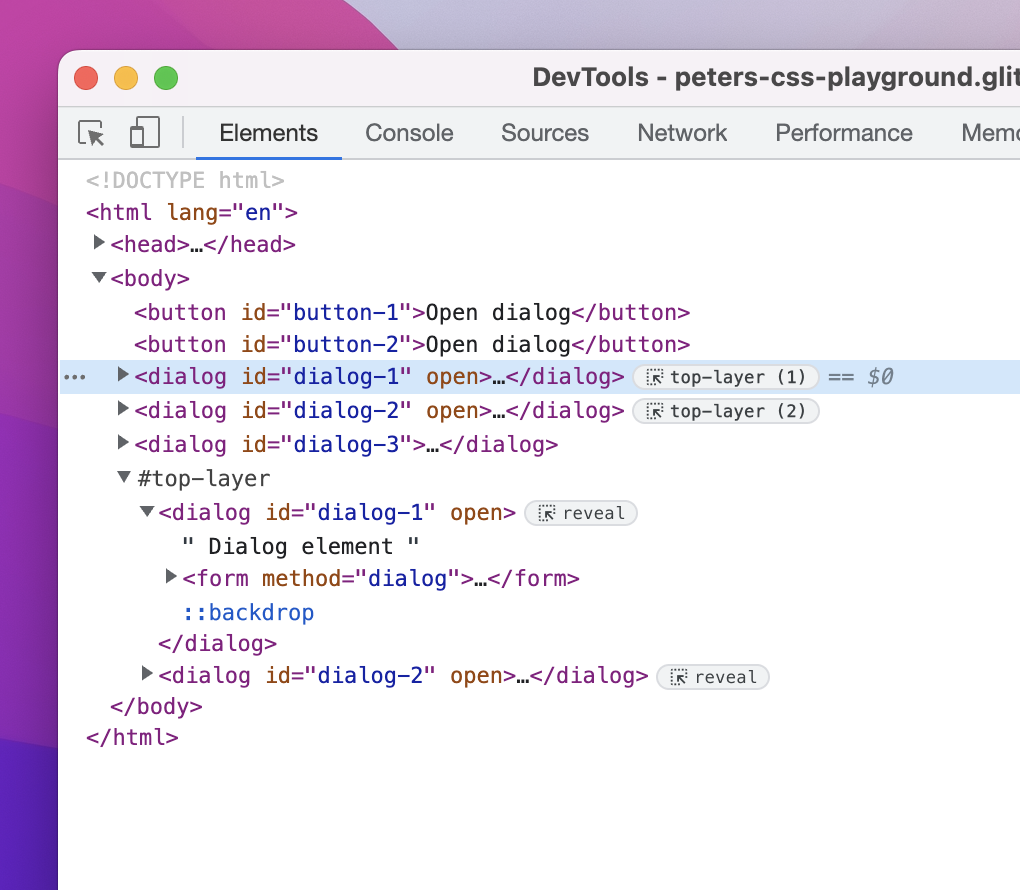 To implement the top layer support, changes to Chrome DevTools Protocol (CDP) are required. CDP serves as a communication protocol between DevTools and Chromium.

We need to add the following:

Alternatively, we could make two events instead of the command: topLayerElementAdded and topLayerElementRemoved. In this case, we would be receiving an element and would need to manage the array of the top layer elements on the front end.

Currently, a frontend event calls the getTopLayerElements command to get a list of updated elements. If we were to send a list of elements or a specific element that caused the change every time an event is triggered, we could avoid one step of calling the command. However, in this case, the frontend would lose the control over which elements are pushed.

We implemented it in this way because, in our opinion, it's better if the frontend decides when to request top layer nodes. For example, if the top layer is collapsed in the UI or the user is using a DevTools panel that doesn't have the elements tree, there's no need to get the extra nodes that could be deeper into the tree.

vom 10.01.2023 um 01:00 Uhr 8065.96 Punkte
Interested in helping improve DevTools? Sign up to participate in Google User Research here. # Recorder: Copy as options for steps, in-page replay, step’s context menu Open an existing user flow in the Recorder. Previously, when you replayed the user flow, DevTools would always start the replay by navigating to or reloading the page. With the lat

vom 26.10.2022 um 02:00 Uhr 7958.81 Punkte
Interested in helping improve DevTools? Sign up to participate in Google User Research here. # Hints for inactive CSS properties DevTools now identifies CSS styles that are valid but have no visible effect. In the Styles pane, DevTools fades out the inactive properties. Hover over the icon next to it to understand why the rule has no visible effect. Chromium issue: 1178508 # Auto-detect XPath and text selectors in the R

vom 12.08.2022 um 02:00 Uhr 7934.72 Punkte
Interested in helping improve DevTools? Sign up to participate in Google User Research here. # Step-by-step replay in the Recorder You can now set a breakpoint and replay a user flow step by step in the Recorder panel. To set a breakpoint, click on the blue dot next to a step. Replay your user flow, the replay will pause before executing the step. From h

vom 13.07.2022 um 02:00 Uhr 7516.05 Punkte
Interested in helping improve DevTools? Sign up to participate in Google User Research here. # Restart frame during debugging The Restart frame feature is back! You can re-run the preceding code when paused somewhere in a function. Previously, this feature was deprecated and removed in Chrome 92 due to stability issues. In this example, the debugger init

vom 14.06.2022 um 02:00 Uhr 6666.26 Punkte
Interested in helping improve DevTools? Sign up to participate in Google User Research here. # Capture double-click and right-click events in the Recorder panel The Recorder panel can now capture double-click and right-click events. In this example, start a recording and try to perform the following steps: Double-click the card to enlarge it Right-click the card and select an action from the context menu To understa

vom 21.07.2022 um 02:00 Uhr 1701.01 Punkte
Chrome DevTools is adding support for top layer elements, making it easier for developers to debug their code that makes use of top layer elements. Note: This is a preview feature available in Chrome Canary from version 105. This article describes what top layer eleme

vom 31.08.2022 um 02:00 Uhr 668.25 Punkte
# Introduction Today, authors can use many abstractions to build their Web applications. Instead of directly interfacing with the lower-level APIs that the Web Platform provides, many authors leverage frameworks, build tools and compilers to write their app

vom 10.06.2022 um 01:33 Uhr 630.94 Punkte
Best of WWDC22WWDC may have come to a close, but there's still so much to explore. Catch up on the highlights and enjoy videos all year long.WWDC22 daily dispatchesIf it's a quick daily report you need or a catchup on all the special events of the week,